The field of time-resolved terahertz (THz) spectroscopy has grown very rapidly over the last few years. Located in between the near infrared and the microwave regions, THz radiation shares properties with both of these spectral domains. On one hand, THz spans a high enough energy range to interact with a vast range of elementary excitations including phonons, excitons, magnons and molecular vibrations. On the other hand, it has a relatively low oscillation frequency that allows near infrared ultrashort pulses to map out directly its electric field component. This technique, referred to as electro-optic sampling, is highly sensitive and can be applied to obtain simultaneously both amplitude and phase information of a THz wave. From such measurements, one can extract the complex dielectric response of a material at a given time. After successive measurements, it is even possible to reconstruct the inner microscopic dynamics that is activated by a synchronous excitation of an ultrafast optical pump. Our research takes advantage of the unique perspective provided by time-resolved THz spectroscopy to explore dynamical phenomena in different classes of materials. We are particularly interested in macroscopic quantum systems in semiconductor multilayered structures and strongly correlated materials. Our experiments rely on utrafast laser sources and nonlinear fiber schemes. Part of our research also focuses on the development of photonics tools to improve THz spectroscopy techniques. A higher detection sensitivity and larger accessible optical frequency window allow us to explore new physical phenomena in matters. 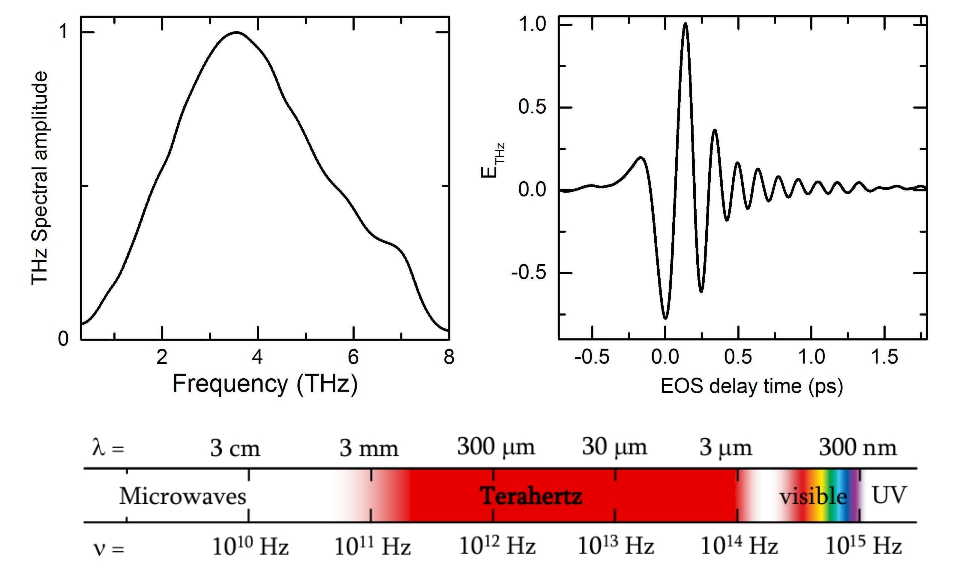 Revealing the dark side of a bright condensate 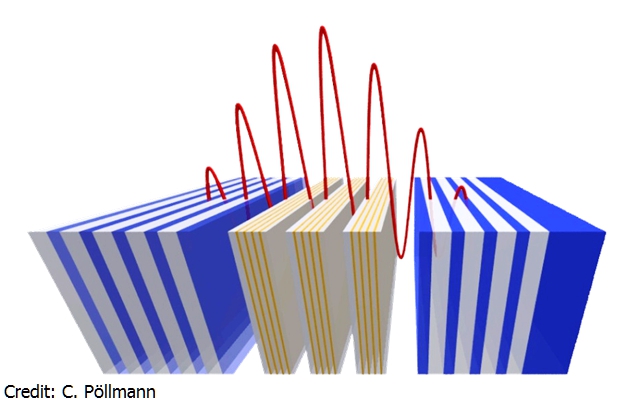 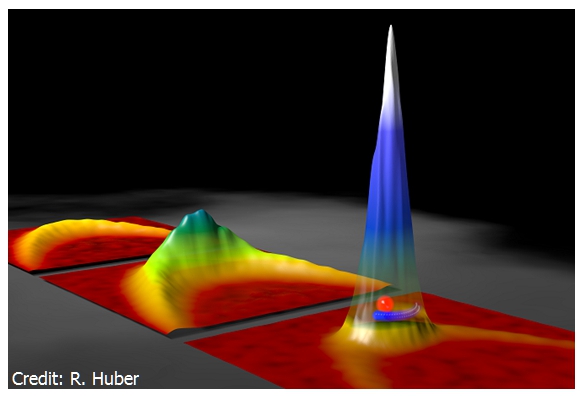 Recent technological advancements in the fabrication of semiconductor microcavities have allowed scientists to tackle one of the most interesting, yet evasive macroscopic states in physics: Bose-Einstein condensation in solids. This state arises from the strong coupling between bound electron-hole pairs, excitons (see animation below), and the cavity photonic field, which enables the formation of cavity polaritons.

As these bosonic quasiparticles thermalize into a single energy and momentum states, their wave functions start to overlap and the system is then represented by a macroscopic coherent state. The mixed light-matter nature of the cavity polaritons provides them with unique properties, such as a small effective mass (5 orders of magnitude lighter than the free electron mass), allowing them to achieve Bose-Einstein condensation at relatively high temperatures (between 5 and 300 K). The condensate, which is highly dynamic, has been extensively studied via photoluminescence (PL) measurements monitoring the collapse of polaritons into their photonic part. The short animation below shows an example of angle resolved PL measurement monitoring an exciton-polariton gas. The condensation corresponds to the collapse of the polaritons into a degenerate energy and momentum (angular) state.

Although many insights can be obtained from the collected PL, many questions remain because such measurements only provide access to the decaying photonic component of the condensate. The other component of the polariton, the exciton, has remained largely unexplored. Recently, interaction between THz radiation and the matter component of a macroscopic quantum state has been demonstrated for the first time. The figure below shows the build-up of an exciton-polariton condensate inside an AlGaAs/GaAs microcavity. Ultrafast THz measurements trace the signature 1s-2p intra-excitonic resonance of the condensed polaritons, which appears as a peak in the optical conductivity (at 18 meV). The forming macroscopic quantum state is first resolved as a function of time delay between a THz probe and an optical pump injecting free carriers inside the microcavity (figure below, left). We then vary the optical pump power to investigate the changes associated to different injected carrier densities (figure below, right). These results have enabled a new field of research in quantum physics that involves concepts borrowed from both the ultrafast optics and condensed matter communities. 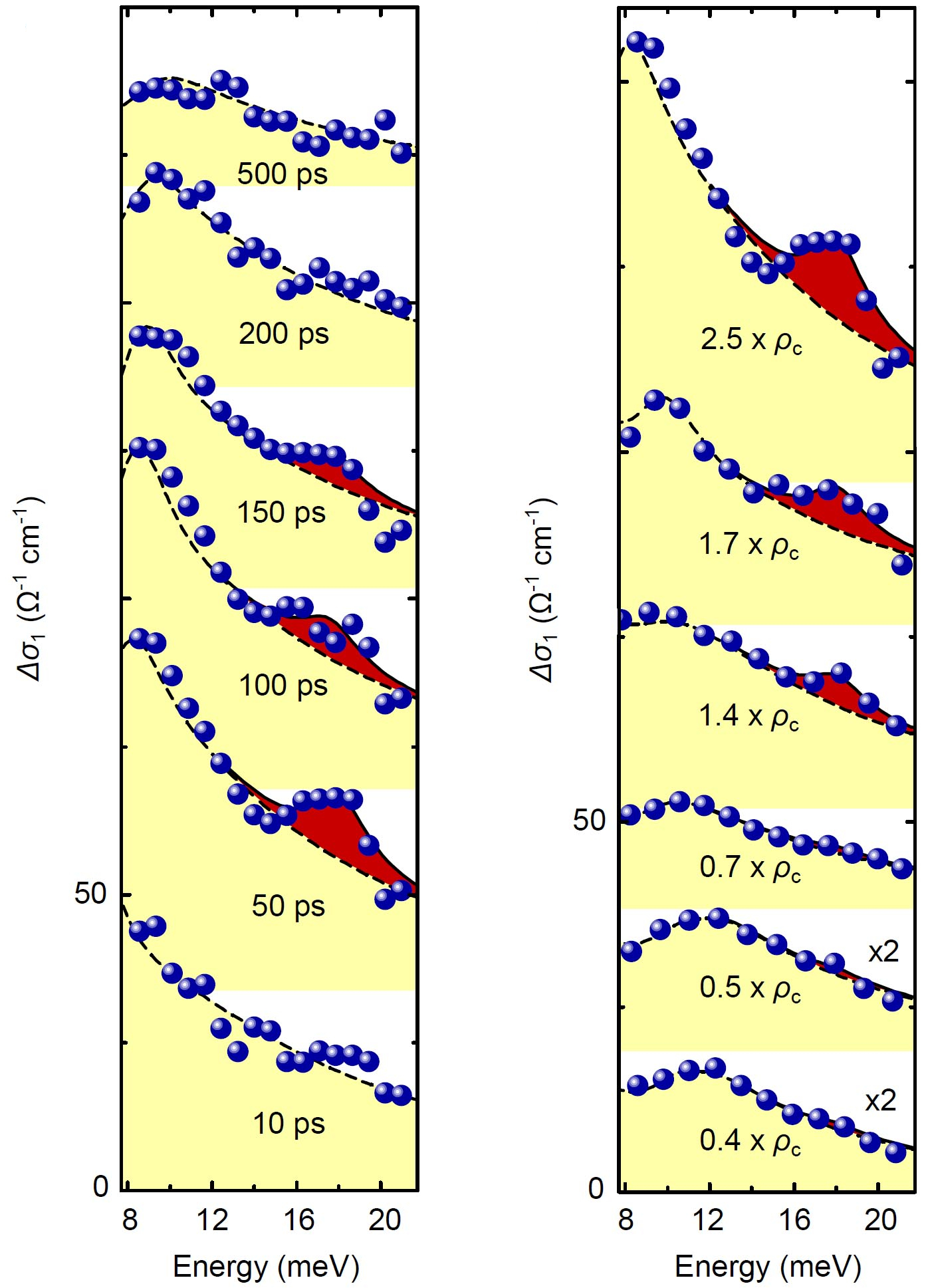 Strong electronic correlations in condensed matter often lead to the spontaneous formation of intriguing macroscopic orders such as charge density waves or unconventional superconductivity. Corresponding phase transitions are typically accompanied by dramatic changes of low-energy excitations in the THz window. Ultrafast THz spectroscopy constitutes an exceptional tool to resolve both the collective plasma response of a material, phonon resonances (see below) associated to a lattice distortion and the formation of excitons. 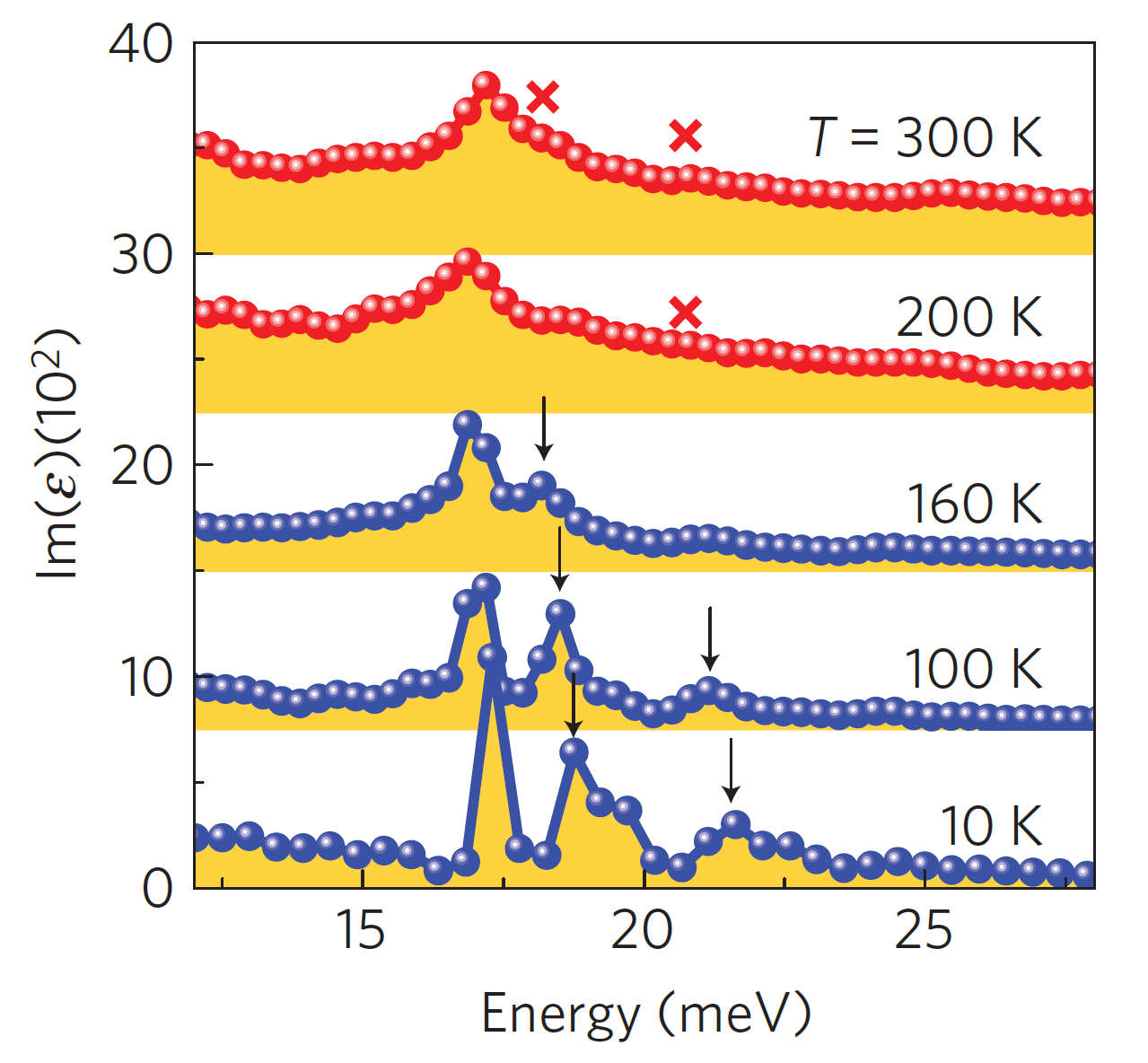 Most importantly, time-resolved measurements can be performed on a transient phase of matter induced by another resonant optical pulse. 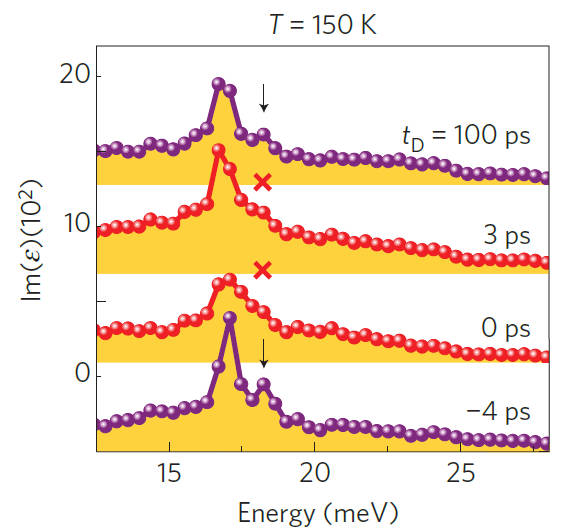 A configuration relying on a near infrared pump and THz probe configuration can be used to map out the recovery dynamics of an ordered state with a femtosecond time resolution. Interaction mechanisms underlying the phase transition in the material can then be uncovered and, to some extent, optically controlled. The figure below illustrates a phase transition leading to a charge density wave. This phase transition, among many others, can be monitored with ultrafast THz spectroscopy. 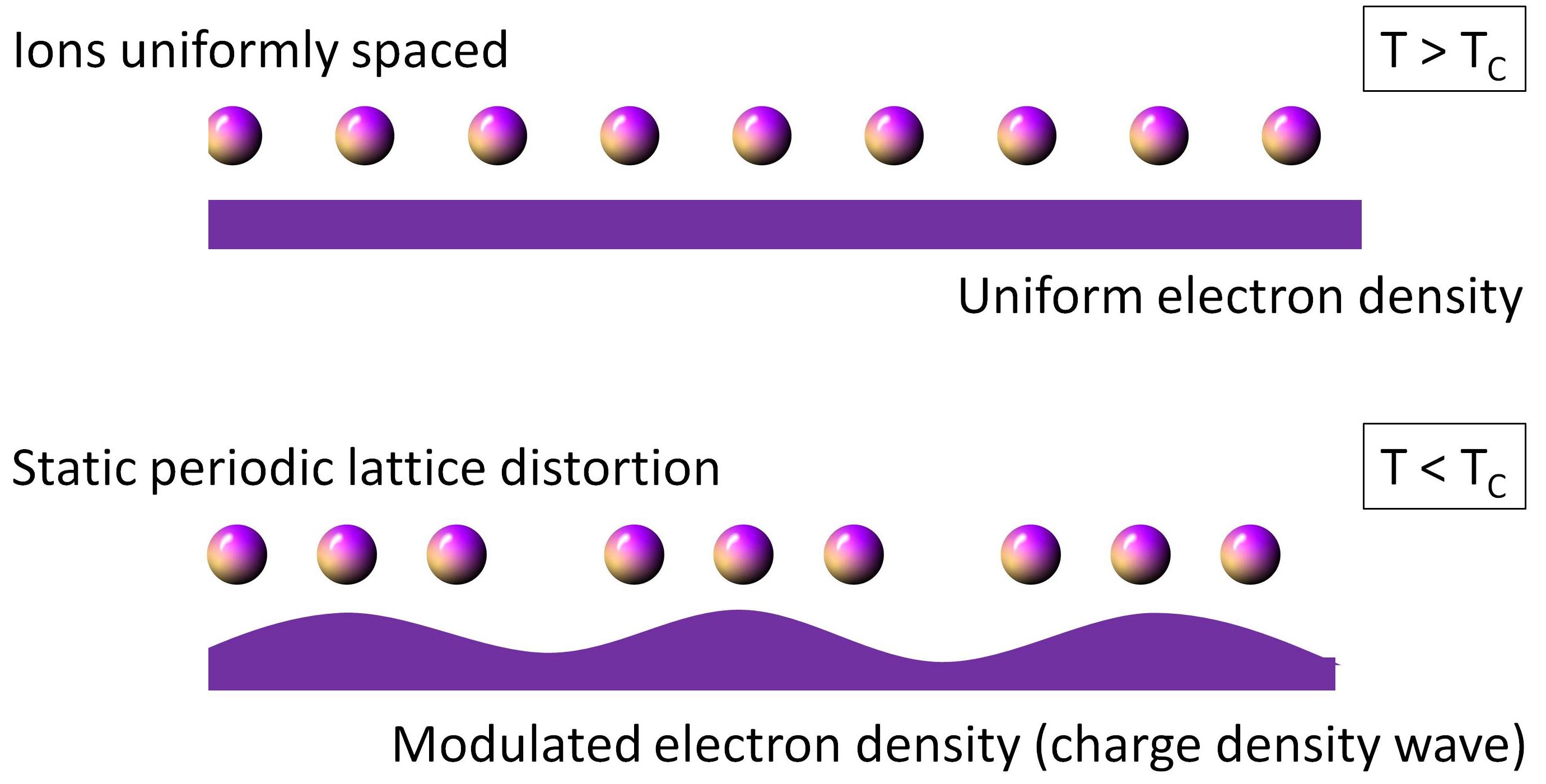 In parallel to THz spectroscopy experiments, new optical tools are being developed in our group to improve THz generation and detection techniques. Optical rectification is a second-order nonlinear optical process used for the generation of phase-locked (CEP stable) broadband THz pulses. This technique is used in sensitive THz spectroscopy schemes, but it generally suffers from either a poor conversion efficiency or a narrow span of generated frequencies. These limitations are dictated by the linear and nonlinear properties of the crystal used for the conversion of visible or near-infrared pump pulses into THz radiation. New nonlinear materials are constantly being researched and developed to improve that conversion efficiency. Recently, we investigated second-order nonlinear processes in gas-filled hollow-core photonic crystal fibres (HC-PCF). Here our goal is to take advantage of the pressure-adjustable dispersion of HC-PCFs to eventually produce an efficient and highly tunable phase-locked THz source. Long-wavelength optical guidance in these fibers have already been demonstrated, but second-order nonlinearity, required for optical rectification, does not typically occur in fibers containing amorphous glass and gas, which are centrosymmetric materials. If, however, a dc electric field is used to break that centrosymmetry, an effective second-order coefficient can be induced. This process was demonstrated by observing and characterizing the generation of second harmonic. More experiments are currently being conducted to boost the nonlinear efficiency and demonstrate optical frequency tunability. 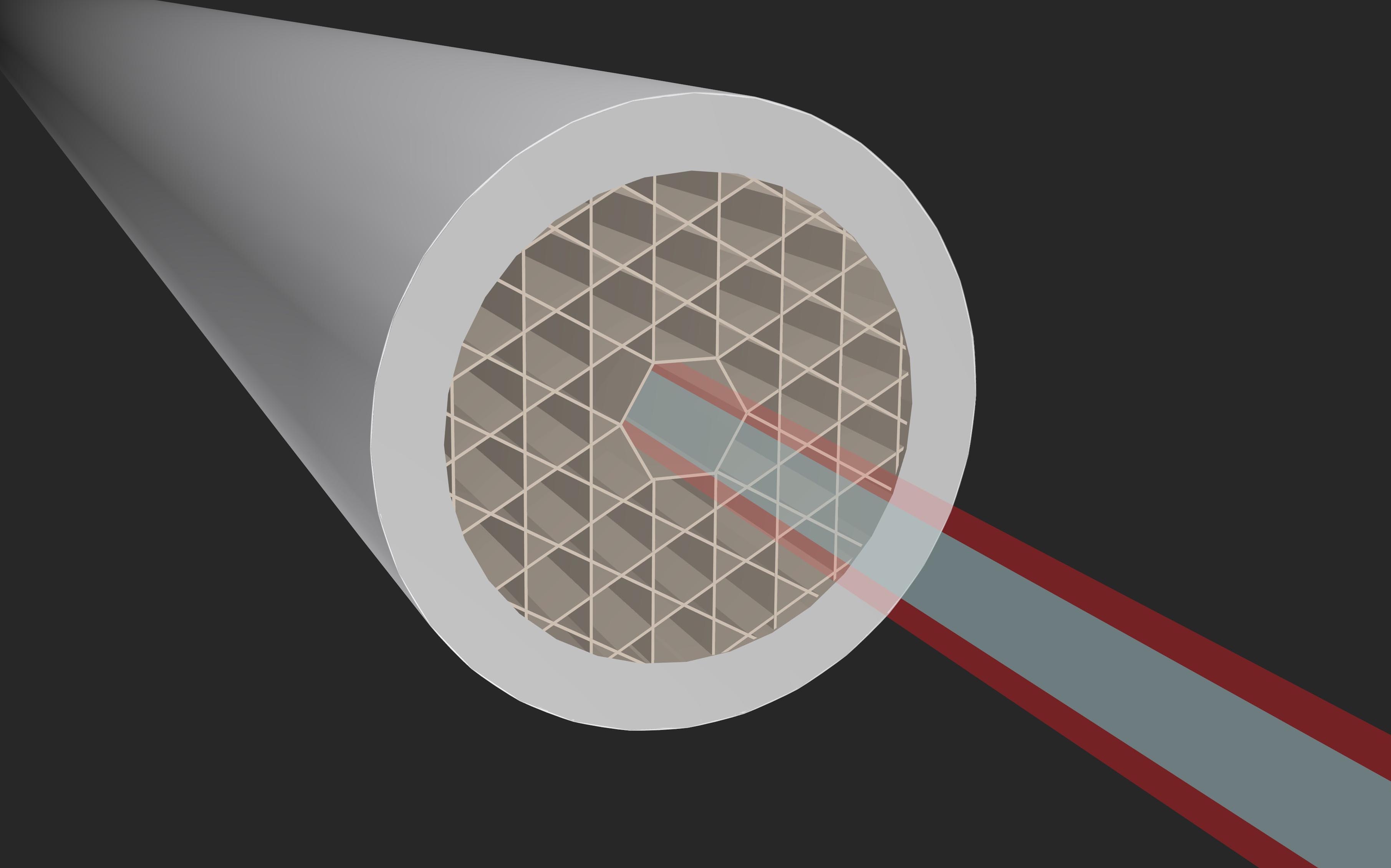 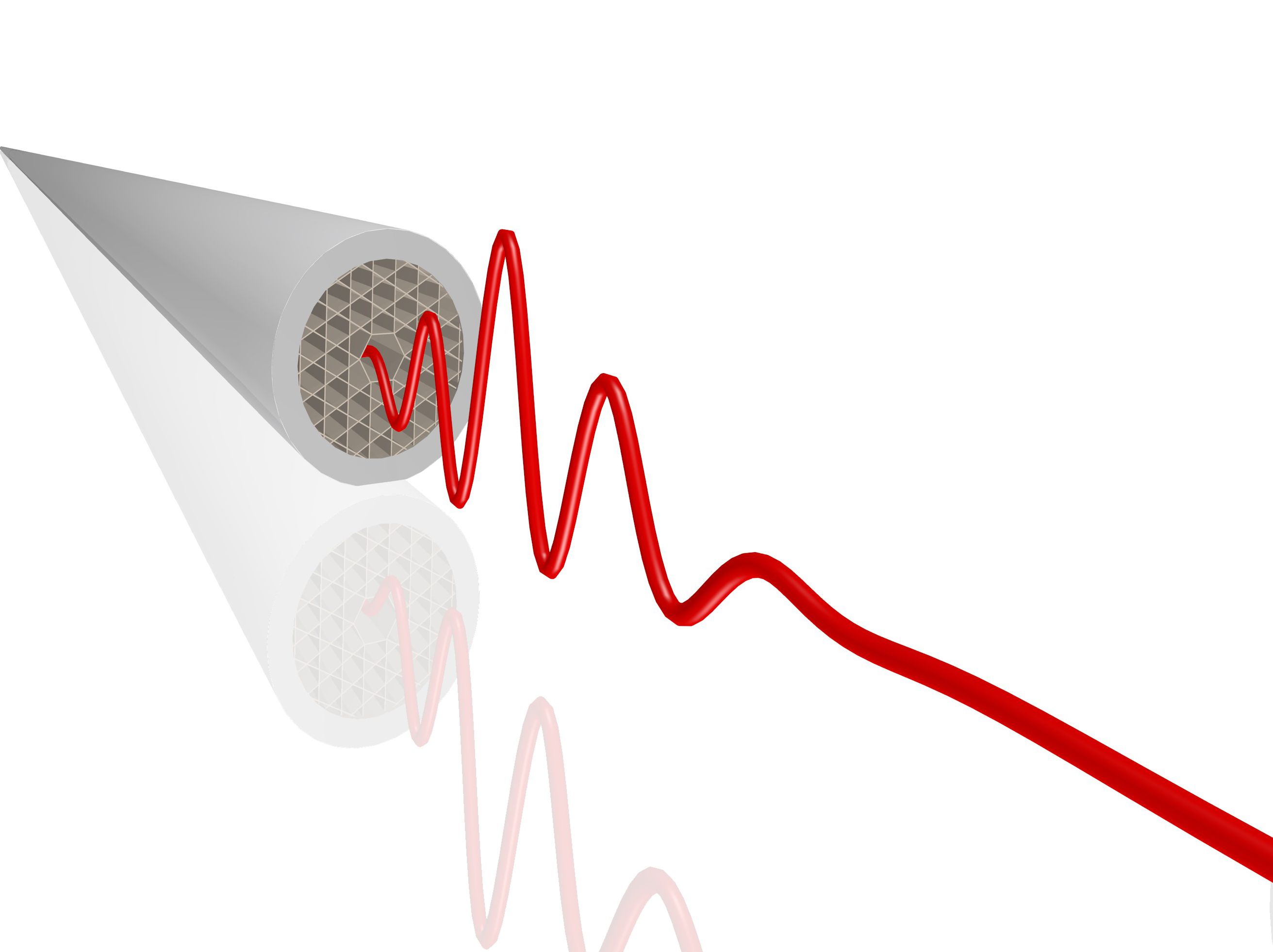